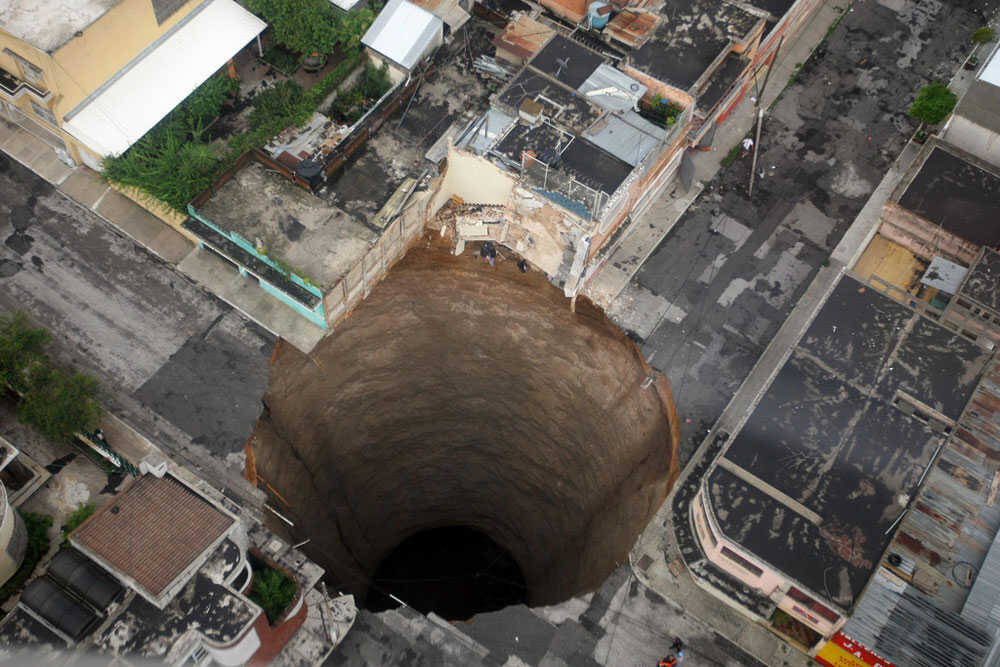 It was the first storm of the 2010 Pacific hurricane season, but one of the most catastrophic. Tropical Storm Agatha began forming on May 29th and became the deadliest tropical cyclone in the eastern Pacific since Hurricane Pauline in 1997. Across Central America hundreds of people were killed and hundreds of people were missing. Yet, amid all the devastation that occurred, it was what happened after the storm that people remember the most.

On May 30th, after the storm passed through Guatemala City, Guatemala, the ground began to collapse, swallowing up an entire three-story factory, powerlines, and reportedly taking the life of a security guard with it. This collapse left a 65ft wide and 300 ft deep hole in the ground that must be seen to believe.

This picture of unforeseen disaster and destruction is often, unfortunately, very common to us all. Our day begins like any other where everything around us appears to be normal, but suddenly there is a storm that comes our way, and it seems as though everything begins to collapse. Though one happens in nature, and one happens in our lives, they are both caused by the things that are unseen.

Massive holes that collapse into the ground like in Guatemala are called sinkholes. Caused by erosion, integrity is lost beneath the surface causing a collapse that takes everything down with it. This erosion can be both natural and manmade. Natural erosion comes from uncontrollable elements like floods, earthquakes, volcanic eruptions, and more. Man Made erosion happens from our own actions and decisions in which we alter the integrity of the foundation. As we enter a new year it’s important that we look not only at what is happening at the surface of our lives, but what is happening beneath the surface as well.

When controllable or uncontrollable storms come your way this year, do you have the integrity to stand, or will you experience a sinkhole in your life? Our culture often values charisma over character. We follow style over substance. We concern ourselves with everything that can be seen. However, I want to remind you that it is your private life that produces your public life. When your private life and your public life are healthy, they create a productive life. This year, work harder at what you’re known for rather than just being known. If you’re not healthy beneath the surface it will all just collapse anyway.

Wishing you a firm foundation,