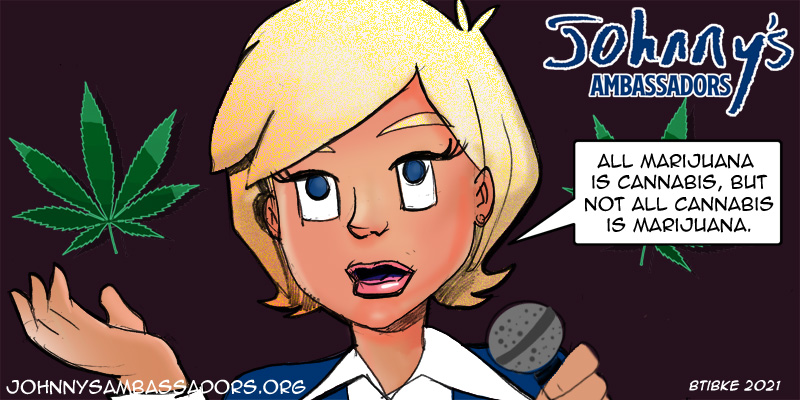 At Johnny’s Ambassadors, we educate parents and teens about the dangers of today’s high-THC marijuana on adolescent brain development, mental illness, and suicide. Recently, Johnny’s Ambassadors has been asked about our usage of the term “marijuana” versus “cannabis.” Some people have implied the word “marijuana” is racist, while others say it’s not racist. Some argue the word was popularized in the United States to stoke anti-Mexican sentiment. Other people believe the term became popular because of Mexican influence on U.S. culture, not because of a conspiracy to demonize Mexican immigrants.

Our Scientific Advisory Board has given Johnny’s Ambassadors specific guidance to use the word “marijuana” over “cannabis” in our work. This article explains the four reasons marijuana is the more appropriate term.

Cannabis is the botanical name for a genus of flowering plants. The genus contains three species (sativa, indica, and ruderalis) and hundreds of selectively bred strains. The plants produce about 100 chemicals unique to the genus, and these chemicals are collectively termed “cannabinoids.” The most important cannabinoids are tetrahydrocannabinol (THC), which is intoxicating, and cannabidiol (CBD), which is biologically active but not intoxicating.

Both hemp and marijuana plants are different varieties of the same species, Sativa, which both belong to the cannabis genus. As a species, hemp refers to cannabis strains with negligible THC content. Marijuana refers to cannabis strains, or their dried leaves or flowers, which contain THC. Hemp contains CBD but not THC, and marijuana contains CBD and THC. They are both part of the genus cannabis. In other words, all marijuana is cannabis, but not all cannabis is marijuana. By definition, marijuana plants contain >0.3% (THC), as compared to hemp plants, which contain <0.3% THC.

Classification for Kingdom Plantae Down to Species Cannabis sativa L.

“Cannabis” is an umbrella term that refers to both the drug that people use to get stoned, and hemp, which isn’t psychoactive and is used for cloth. So, it isn’t sufficient to define the type of plant. Same plant, different purposes, same word. Therefore, we use the term “marijuana” to describe THC-containing plants, leaves, or flowers from the Cannabis Sativa L species. Cannabis is an umbrella term to describe the entire genus, and marijuana is a specific term to describe the intoxicating species.

These existing governmental organizations use the word ‘marijuana’:

The majority of state laws that have legalized cannabis have used the term “marijuana.” Johnny’s Ambassadors is based in Colorado, the first state to legalize recreational marijuana. Our Department of Public Health and Environment uses the term ‘marijuana’ to describe the specific variety of the cannabis sativa L species, so we follow this guidance to avoid confusion. For example, the statues refer to a Medical Marijuana Card.

Google Analytics suggests that more people speak of marijuana than cannabis. Here is Webster’s dictionary definition: marijuana: 1. hemp; 2. its dried leaves and flowers, smoked, esp. in the form of cigarettes, for euphoric effects. Here is Britannica’s definition: Marijuana, also spelled marihuana, crude drug composed of the leaves and flowers of plants in the genus Cannabis. The term marijuana is sometimes used interchangeably with cannabis; however, the latter refers specifically to the plant genus, which comprises C. sativa and, by some classifications, C. indica and C. ruderalis. Marijuana is known by a variety of other names, including pot, tea, grass, and weed. It is usually dried and crushed and put into pipes or formed into cigarettes (joints) for smoking. It can also be added to foods and beverages.

You’re going to want to use the language that corresponds to the way that ordinary people use the drug,” says Geoffrey Nunberg, a linguist who teaches at the UC Berkeley’s School of Information. “I don’t think ‘cannabis’ is ever going to push out ‘marijuana’ in the general lexicon.”

Even Cannabis legalization proponents use the word marijuana in their names. For example, the National Organization for the Reform of Marijuana Laws, the Marijuana Policy Project, Help End Marijuana Prohibition Party of Australia, and the Marijuana Party of Canada all use this term.

Finally, the Associated Press Stylebook provides these guidelines to “Use marijuana on first reference generally; pot and cannabis are also acceptable. Cannabis is the usual term outside North America.”

We hope this article helps clear up the confusion about the difference between cannabis and marijuana. Some components of the marijuana plant, such as the CBD in the prescription drug, Epidiolex, have been used to treat rare seizure disorders. In an attempt to emphasize the marijuana drug’s ‘medicinal’ benefits, the pro-marijuana industry will often incorrectly use the term ‘cannabis’ instead of the scientific term ‘marijuana’ to legitimize itself and attempt to mislead people about the drug’s safety. However, THC has been proven to cause harm to adolescent brain development, so we reject this attempt to demonize the word marijuana.